WINTERSTEIGER has two good reasons to celebrate: 60th anniversary of the company and inauguration of a new building 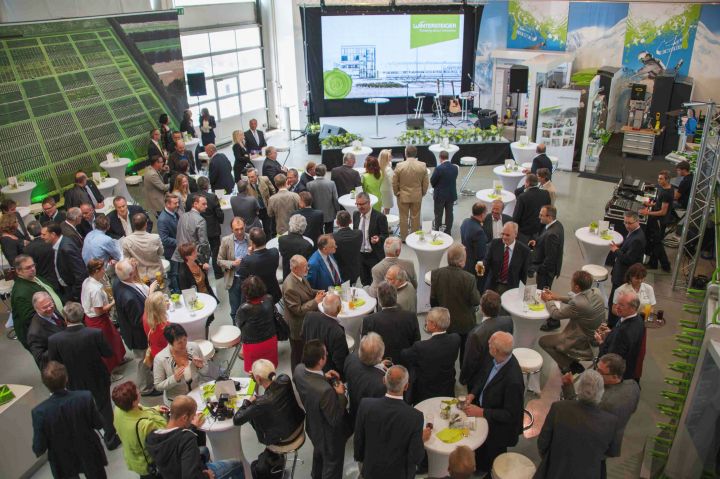 WINTERSTEIGER, the special-purpose machine manufacturer from Ried im Innkreis, has developed into an international group with 18 locations and 810 staff in the past 60 years. In 2012, WINTERSTEIGER AG achieved a record turnover for the third time in a row, totalling 126.2 million €. In the scope of the company's 60th anniversary, the new company building, which was completed in 2012, was officially inaugurated.

Since its founding in 1953, WINTERSTEIGER has developed from a small joiner's workshop to the world market leader in 3 key divisions, field trial technology, ski service and thin-cutting of wood. The foundation stone was laid with field trial technology, and today WINTERSTEIGER supplies seed breeders and research laboratories worldwide with technical equipment for harvesting and sowing. The largest business field in terms of turnover is SPORTS with solutions for SPORTS retailers and ski rental, from fully-automated ski service machines, through to ski lockers and drying systems. As a recognized specialist for precise thin-cutting of wood, WINTERSTEIGER supplies customers from parquet flooring, door and window industry with thin-cutting saws.

In 2011, Germany's Kohler Maschinenbau was acquired, adding the company's fourth pillar, which produces leveling machines for the sheet metal processing industry, for example, the automotive industry.

More production and office space at the Ried location

Permanent growth at special-purpose machine manufacturer WINTERSTEIGER necessitated growth in terms of floor space. For this reason, the main warehouse was relocated to the new logistics centre at St. Martin in 2011, and the production and office space at the Ried plant was then extended.

Managing Director Reiner Thalacker commented on this development: "Expanding the facility gives us the basis for our turnover targets. The additional production floor space means that we have been able to substantially optimize our manufacturing processes, and support them even more efficiently from our new offices."

After purchasing the road "Am Burgfried", which ran across the company grounds between the production facilities, the new building project was launched in 2011. Building an additional production facility over the original road meant that assembly could then be joined to form a single complex. Relocating the main warehouse and the new facility with a floor space of 800 m² means that WINTERSTEIGER now has a total of 2,000 m² additional production and assembly space.

Offices and meeting rooms with an area of 1,600 m² were created above the new facility. The central position of the new offices means shorter routes to production and to the colleagues in the surrounding buildings. The entire building project with a total investment of some 5 million euros was completed in the fall of 2012.

In 1953, Fritz Walter and Johann WINTERSTEIGER founded WALTER & WINTERSTEIGER in the old smithy at Obernberg am Inn. Originally specializing in machine repairs, the smart entrepreneurs quickly started developing the first machines for seed breeding – a simple seeder and a laboratory thresher. This laid the foundation for today's extremely successful field trial technology business area. In 1960, WINTERSTEIGER was the first company in the world to start serial production of a plot combine.

10 years after the company was founded, the second big business area, SPORTS, was launched with the production of ski manufacturing machines for Fischer. Production at today's site in Dimmelstraße, Ried started in 1965. In the years that followed, WINTERSTEIGER built large series of machines for field trials – and was delighted to receive a large-scale contract for 165 combines in 1975 for delivery to the former USSR. In 1983, the company filed a global patent for the precision spaced planter.

The next milestone in the SPORTS business area was the production of the first stone grinding machine for Fischer; it enabled micro-surface grinding which was revolutionary at the time. Moving from ski manufacturing to ski service machines in 1978 marked the departure into a new, successful phase of the company's history. Global marketing began with the foundation of the first subsidiary in Germany.

Preparation of the thin-cutting frame saw for the parquet flooring industry, which had been developed back in 1970 for manufacturing ski production machines, set the points for entering the wood thin-cutting business area in the early nineties.

Success in SPORTS: In 1998, WINTERSTEIGER became the exclusive machine provider of the Austrian Ski Federation.

After Germany, France and the USA, subsidiaries were founded in Canada, Italy, Switzerland, Singapore, China, Brazil and Moscow. Further growth milestones were set in 1999 with the acquisition of SKID in France, and HEGE in Germany, and in 2002 with SPIRAKUT in the USA and SKI2 in France; then in 2004 with Banholzer in Germany, and 2011 with Bootdoc in Austria.

After taking over a majority shareholding in Germany's Kohler GmbH, Friesenheim, the fourth pillar of WINTERSTEIGER's business was added in 2011 in the form of levelling technology. Kohler produces levelling systems for the sheet metal processing industry, such as the automotive industry.

Many building extensions in Ried and the subsidiaries have accompanied and enabled these developments in the past 60 years, and WINTERSTEIGER will continue to bank on sustainable enterprise growth in the future: the next building project – the new building for Kohler in Germany – will be launched in the fall of 2013.

Besides infrastructure, WINTERSTEIGER also develops its human resources. Staff now totals 810, 500 of whom are based in Ried. This makes WINTERSTEIGER one of the biggest employers in the Innviertel region. We are very much aware that on-going success relies on an excellently trained, long-term, specialist workforce, and the international machine manufacturing group has much to offer them. Qualifying staff internally, and planning an inside career track, are part of WINTERSTEIGER's company philosophy; in line with this, career options are versatile, and career opportunities diverse.

Pronounced staff orientation is reflected in many voluntary fringe benefits, such as a company health scheme, or company SPORTS; this not only provides for a pleasant working atmosphere, but also ensures the innovative force of the company – which has been evident for 60 years.