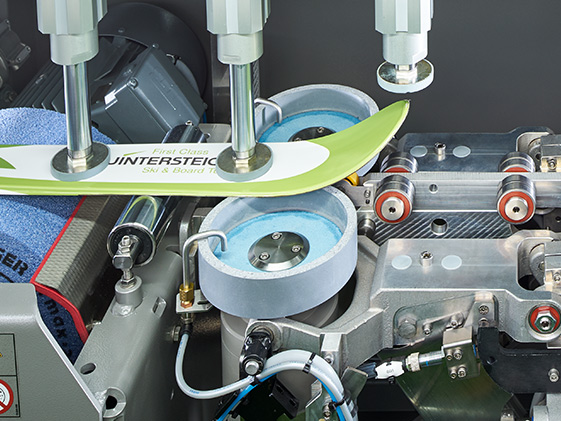 CLARKSTON, Mich. – Racing and recreational skiers alike will ski more confidently and perform better on precisely tuned skis, and precisely tuning a ski requires state-of-the-art technology. Vertical Drop Ski Shop has invested in that technology and just completed installation of a WINTERSTEIGER Scout ski tuning machine, the only machine of its kind in a non-resort Michigan ski shop.

The Scout is a fully automated system that will tune the edges of skis to exacting parameters as well as re-structure the bases. The machine tunes skis by making the edges sharp and the bases flat, rehabilitating the ski back to the manufacturer specifications.

“I can’t tell you how often seasoned skiers have told me they’ve lost the joy in skiing and aren’t able to ski as well as they used to,” said Bob Thomas, owner of Vertical Drop. “The same has happened with racers, they say they aren’t performing well. I can definitively say it’s not the skier, it’s the skis. They need to be properly tuned every season.”

WINTERSTEIGER, the official supplier to the U.S. Ski & Snowboard Team and official ski tuning supplier to the Center of Excellence is the global leader in tuning for the competitive skiing world and beyond. With four decades of experience and more than 35,000 ski tuning machines sold worldwide, WINTERSTEIGER is the global market leader in ski service solutions. The Austrian, German, and U.S. Ski Teams as well as ski manufacturers Atomic, Fischer, Head, Rossignol, and Salomon rely on the highest-quality results provided by WINTERSTEIGER ski tuning machines. The Scout will position Vertical Drop to offer the highest quality, most consistent ski tuning in the region.

“Vertical Drop Ski Shop is committed to the highest level of performance/race tuning. Clearly, their investment in state of the art equipment from WINTERSTEIGER and SWIX speaks for itself. But Vertical Drop has also invested in properly training their staff to provide their customers with precision ski service techniques and the fastest equipment setups possible.” - Graham Lonetto- SWIX USA Alpine Director/WINTERSTEIGER Race Services and Education Coordinator/RACEtech-USA Owner “The official ski service provider of the U.S. Ski Team”/ASP Ski Protection owner.

The Scout will improve Vertical Drop’s service by offering the following features:

“Using the Scout, we can achieve almost double the throughput of one technician using two manual machines,” Thomas said. “As of last week, we already have nearly 200 pairs of skis to tune. The Scout will expedite the process and provide our customers with the best tune for optimal performance, regardless of skiing ability.”

Founder Bob Thomas brings more than 50 years of ski industry and experience to his new shop. His father, Don Thomas, was a pioneer in Michigan skiing and created a family culture where skiing was front and center. For more information visit verticaldropskishop.com