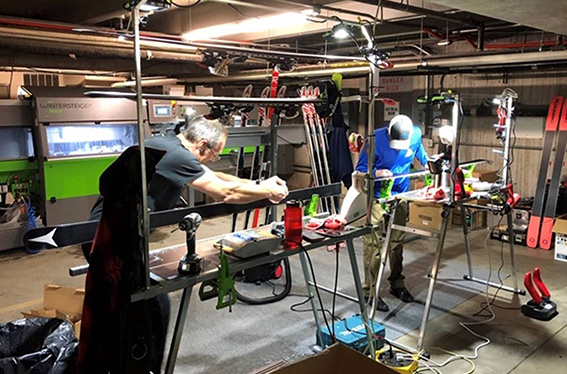 WINTERSTEIGER, official supplier to U.S. Ski & Snowboard since 2001, and exclusive tuning partner for the Land Rover U.S. Alpine Ski Team, set up a pop-up shop at the U.S. Ski Team Speed Center at Copper Mountain this past November.

WINTERSTEIGER’s World Cup pedigree and support of the U.S. Ski Team make them the obvious machine tuning choice for both the U.S. Ski Team and other U.S. Ski & Snowboard club programs training at Copper Mountain. For the U.S. Ski Team, the goal was to launch a ski education platform that would allow coaches to address equipment problems quickly, visually. The idea is that properly tuned equipment makes it easier for the athlete to execute technique, and well-maintained equipment turns better and glides faster, thus, simply, increasing the athletes’ performance.

The ski tuning clinic program included in-depth training about ski tuning safety, a ski audit, ski flattening and structure, and identifying the missing piece—for instance, asking the questions: Is the binding position correct? Is the base bevel correct? Is the base structure correct? Are we using the correct side edge bevel? Is the wax correct? This initiative proved to be a significant help to the U.S. Ski Team, and development level athletes, in particular.

“WINTERSTEIGER and Swix teamed up to provide a tuning center at the U.S. Ski Team Speed Center at Copper Mountain during the month of November,” commented Land Rover U.S. Ski Team Alpine Director Jesse Hunt. “With its state-of-the-art equipment and well-educated service personnel, this tuning center was a game-changer for the development athletes attending Copper Mountain camps. Hundreds of skis were evaluated and, as a result, many of those skis were tuned by professional technicians onsite. It was an amazing service for our up-and-coming athletes, many of whom have not received this type of ski preparation before. Big props, specifically, to serviceman Michael Beer, who did the lion’s share of the work.”

Initially, these services were exclusive to the U.S. Ski Team but were then made available to other athletes around November 10th. The temporary shop in Copper acted as a supplement to WINTERSTEIGER’s established partner locations in Colorado that use the same machinery and processes found in factory race rooms around the world. With the ultimate goal of minimizing equipment as a variable, it is critical that the machines your local shops utilize are as serious as you are.

U.S. Ski & Snowboard is the Olympic National Governing Body (NGB) of ski and snowboard sports in the USA, based in Park City, Utah. Tracing its roots directly back to 1905, the organization represents nearly 200 elite skiers and snowboarders in 2019, competing in seven teams; alpine, cross country, freeski, freestyle, snowboard, nordic combined and ski jumping. In addition to the elite teams, U.S. Ski & Snowboard also provides leadership and direction for tens of thousands of young skiers and snowboarders across the USA, encouraging and supporting them in achieving excellence. By empowering national teams, clubs, coaches, parents, officials, volunteers and fans, U.S. Ski & Snowboard is committed to the progression of its sports, athlete success and the value of team.