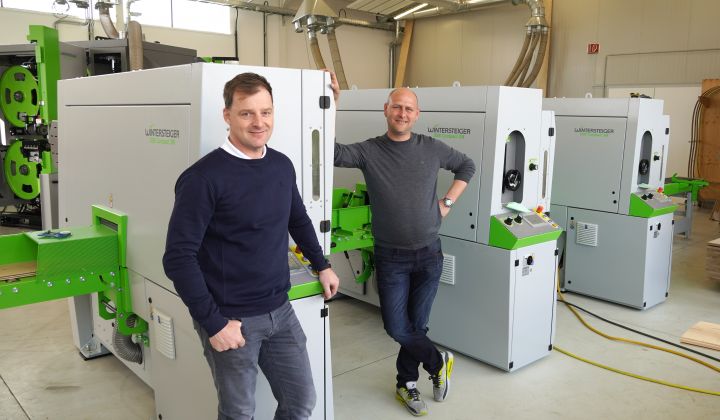 3 WINTERSTEIGER thin-cutting band saws are back on board

In a fire disaster on March 1, 2020, the company building of A&D Houtbewerking was completely destroyed. Reconstruction started at the beginning of 2021 and in order to restart operations at the end of May, Dirkjan van Vliet ordered 3 WINTERSTEIGER DSB Compact XM thin-cutting band saws: exactly the same machines he had before.

Dirkjan van Vliet, who says that he “generally loves machines”, is enthusiastic about the DSB Compact XM thin-cutting band saw. Shortly after ordering his first DSB Compact in 2017, he realized the advantages compared to his previous sawing machine: “The Compact from WINTERSTEIGER is faster and the precision of the top layers is much better.” So, only one year later, Dirkjan bought his next DSB Compact XM and after another 8 months, the third machine was running in his production. At that time, the 3 band saw machines were connected and worked in-line. "I was the first one to have this solution and I was very happy about the possibility of one employee operating three machines. The Compact is very efficient and we save a lot of time. The other guys can do something else instead."

Dirkjan produces around 100,000 m2 per year and explains about his output: “With the Compact I get more m2 out of 1 m3 wood. I save a lot of wood and so the machine earns the money back.”

About saw blade and customer service.

Dirkjan sends the saw blades to the WINTERSTEIGER Sägen GmbH in Arnstadt, Germany, for sharpening. “The saw blade service at Arnstadt is always fine and I can produce the same metres with a blade every time.” The entrepreneur is very satisfied with the service provided by the WINTERSTEIGER team and he states, "The cooperation with WINTERSTEIGER is top. I don't know any other company with this level of service, and that's also the reason why I invested in 3 WINTERSTEIGER machines again, everything is 100% right."